One foot in the air 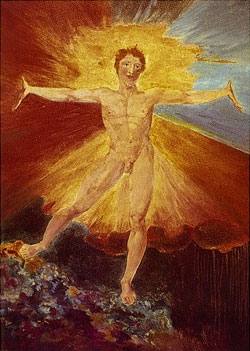 I often conjure up in my mind’s eye Blake’s “Glad Day” when I ponder the concept of “void” or “pure potential”. Does such a thing even exist, a question raised by my last post “Courage and Curiosity in the Void“? Our collective tendency to assume that it doesn’t, that all is already known, quantifiable, a version of familiar…that, as it were, all our building blocks are already laid out on the floor and all we can do is endlessly, and with ever-depleted enthusiasm, keep on trying to rearrange them in some sort of way that might “work” better (though, always assuming those ways being to be finite and heavily constrained by what we call law of science) is one of the biggest sticking points of humanity.

Void suggests there is far more that we don’t know and haven’t yet explored than that we do and have!

Which is where I always stand (yes, perhaps somewhat wobbly-seeming, compared to those who prefer both feet planted…but then its also the main source of my perpetual “gladness”). Perhaps this is due to the fact I am the consummate “creator” type, as in I am an artist first and foremost and we all know us artists prefer to keep one leg up-away from the solid earth, but I don’t just mean “creator” with a brush. To consider that “this” is all there is, and that we have to “just make do” with present circumstances and the linear route out of them, has never been palatable to me, for as long as I can remember…long before we got “here”. It’s what keeps me sane and eternally optimistic.

So, is there ever the possibility of void? As I just responded to a comment on that last post (and I hope my reader won’t mind me repeating my response here because it felt worthy of the longer discussion), yes there is most certainly the possibility of “void” but we need to feel into the quantum layer of what we refer to as “existence” to get even close to it. Meditation helps enormously. Holding space in our mental constructs (by making them much more elastic than has been the cultural norm for some time…) for something new, surprising, unusual or perhaps relatively common but previously denied or even feared (as is common when humans are confronted by the unfamiliar) to arise and unravel is a major part of it. Taking this newness in without allowing the mind to charge in and dictate what this means the very minute it gets wind of this thing (a response that always comes from our pre-conceptions, prior experiences etc.) allows us to step into that void and be part of its manifestation through resonance with our own cellular voids (every cell has its own empty space, just waiting for new expression to work with, inside and out). Its also something you tend to learn to play with as an artist, craftsperson, composer etc. (in which scenarios the competent use of “void” is just as important as what we “do” with the manifest or structural…) but, then, we are all creators of our own experience. We each have direct access to “void”, as-in the pure-potential for literally anything to happen or manifest, just as soon as we are each prepared to enter into it in our unique and highly potentiated ways.

It can feel a bit like jumping into a pool with no sides…but oh the gladness to be there.

So, back to my opening thread, this is something William Blake tried to explore with his painting of the Vitruvian Man entitled “Glad Day”, in which the figure is set free from the constraining circle (familiar from Leonardo da Vinci’s portrayal of human proportions) and has one foot up in the air, its intention or direction as yet undefined, going who-knows-where….like a joyful leap into the unknown. I think we are all so-poised at this unique moment in our “story”, now the old story is no longer holding water. If we so choose, this can become our own “glad day”, just as soon as we make it so by embracing the liberation and pure potential of the void over any other fixed ideas that may try to assert or oppress or drag us back into the dark cave of fear, smallness and resignation.

Helen White is a professional artist and published writer with two primary blogs to her name. Her themes pivot around health and wellbeing, expanded consciousness and ways of noticing how life is a constant dance between the deeply subjective and the collective-universal, all of which she explores with a daily hunger to get to know herself better. Her blog Living Whole shines a light on living with high sensitivity, dealing with trauma and healing from chronic health issues. Spinning the Light is an extremely broad-based platform where she elucidates the everyday alchemy of relentless self-exploration. A lifetime of "feeling like an outsider" slowly emerged as neurodivergence (being a Highly Sensitive Person with ADHD, synaesthesia, sensory processing challenges and other defecits overlapping with giftedness). All of these topics are covered in her blogs, written from two distinct vantage points so, if you have enjoyed one of them, you may wish to explore the other for a different, yet entirely complimentary, perspective.
View all posts by Helen White →
This entry was posted in Art, Art purpose, Art transformation tool, Life choices, Menu, Personal Development, Spirituality and tagged 2020, artist creator, beyond linearity, exploring the unknown, glad day, leap into the unknown, meditation, new paradigm, newness, optimism, pure potential, quantum, right-hemisphere, vitruvian man, void, where we are now, William Blake. Bookmark the permalink.