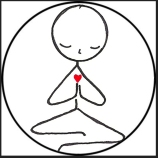 When we “arrived” here in our most primitive physical version, humans were like this figure (you could take the circle to be their Whole World); in other words, we were an aspect of wholeness and knew nothing except this seamless experience of unity conciousness. Us, other creatures, our environment, the weather…all these things were the same and “of” the same source, with no stark division lines so what we experienced was interpreted fluidly, without segregation into logic or labels.

Then, as the first stirrings of evolution occurred, we became

fragmented…at first into two portions (“me” and “other”) and then into four (shades of preference within those segments = “good/preferable” or “bad/not-so-preferable” versions of “me” and “other”). So now we were like a cross (some people call it the True Cross), equally divided into four aspects yet there was balance, or sorts, since we operated from our heart-core…and we lived like this for A Very Long Time.

Then, at some point, massive collective trauma happened to us, perhaps a cataclysm, and fear drove us away from the heart as the Need to Survive in the face of unprecedented hardship presented itself. So it was decided for the majority, by a minority who saw the self-advantage in this, that we needed

our brains far more than our hearts, thus our centre point was moved from heart to the head, resulting in a very different paradigm of existence to what had been there before. This, diagramatically speaking, looks like a very different cross to the True Cross in the way our priorities were weighted off-centre, in favour of the head (both within the individual and in society at large). This distorted cross came to represent bloodshed and sacrifice, separation, fear, blame, lack…not to mention the need to appease, to negotiate or to Pay A Price for everything that was once freely available to all. Mixed in with all that were some new concepts on the block; materialism, competition, ownership, poverty, dominion, discrimination, abuse and slavery. We have lived like this for at least 6000 years now and our heads have been deemed to be central to absolutely everything we think we know during that off-centred time.

Underlying all of this, there is another segmented circle that runs core to everything in creation and it is shown to us constantly by the moon. The phases of the moon demonstrate the

same four-segmented circle made up of waxing and waning, further divided by dark (hidden) and light (in full view) portions, that we used to operate to when we were still in our centre (and when the moon reminds of us of those times, we can really feel its pull). The dark side represents the feminine aspect and the light the masculine; their balanced partnership being intrinsic to everything in creation.

When how we operate as humans was apportioned by the true heart-centred cross, our feminine aspect remained deep below the surface as the most mysterious aspects of our awareness and as our inherent earth-connection whilst our masculine revealed itself in full view as the manifest world we engaged with day-to-day. While there was heart-centred balance, these two aspects worked in easy partnership and were both valued and incorporated. 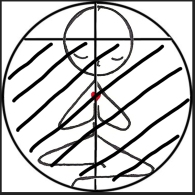 After our collective trauma and the relocation of our centre to the head, this was no longer tenable since the feminine aspect could not be without a heart centre and the masculine aspect, whilst believing it had claimed the best power-seat in the house, is also naturally competitive (and this arrangement left the feminine aspect with the larger territory, as shown to the left). So the masculine aspect began to delve into matters that were often best left to the feminine “below the line” and closer to the earth, as it were (seeking to formularise and control such information in the name of “science”), even plunging and plundering that territory in ways that are now manifest as a long human history of sexual abuses and our ecologically challenged planet that has been near drained of resources. It did this in a way that almost always, by the way, made the body and the earth second-class domains thus subservient to the will and dictatorship of the head. Meanwhile, the feminine gradually made her way towards the head, seeking first to keep communication channels open in order to negotiate a say in things (hence the long history of the feminine aspect voicing concerns, which has not always ended well for her…). In more recent times, she has had to play the masculine at his own game by making headway into the realm of academic pursuit and the material world. On the back of this crossing over of interests, the split between masculine and feminine rotated to become primarily a vertical “line”, rather than a horizontal split between head and heart…made manfest as a peculiarly distinct separation of left and right hemispheres of the brain (and thus the entire nervous system).

Not content with such a carving-up of her domain into hard left and right hemispherical segments, the feminine aspect then worked to evolve a series of energy centres like a ladder of communication points along the dividing line between “sides” and so the chakras came into their rainbow-coloured existence, which lead to leaps in evolution for those who were able to attune to them. This upward momentum served us well as it formalised our connection to the universe (which had always been there…if somewhat woolly since the days of our trauma, after which the right to connect with the spiritual domain was claimed as yet another dominion by the masculine in the name of “church”). Now, there was a distinct energy flow made possible between “it” and all the physical centres of the body and so kundalini was able to flow with increasing velocity; an intrinsic part of our evolutionary process…

Bringing us to where we are right now; in full flow yet still significantly divided.

Evolutionarily speaking, all this fragmentation has served a purpose; the challenges it has presented growing us for a time when we would be ready to come back together as whole once again. Only, this time, we would come back into wholeness knowing ourselves whereas, at the start of this evolutionary process, we knew only that wholeness, to such a high degree that we had no concept of the self that was aware of it. This time we would bring self-awareness into that unity consciousness, which would make divinity manifest in physical form; you could say, the name of the game.

In moon phase terms, the still-popular idea governing our world today is that the more fully masculine or brain-oriented you are, in the way of a full moon, the more manifest (you could say, “successful”) you are in human terms. The feminine aspect knows that we need equal portions of both dark and light and that, like the cycles of the moon, we do better when we dip in and out of both sides of that circle, experiencing all those perspectives without making them wrong. While the dark aspect of who we are continues to be denied, it will continue to assert in all the distorted ways that we hear about in the news since we innately crave its presence (not as these modern-day distortions but as the more mysterious qualities that represent the feminine aspect of who we are and how we connect to source).

Once we own this feminine brand of “darkness” as an intrinsic part of ourselves, it can easily be reincorporated into who we are at every level, from micro to macro, and will bring healing swiftly, on a grand scale. At this point, all the hard-won communication channels that we have had to formulate over eons of evolution will dissolve into free-flowing highways of awareness. The two hemispheres of the brain will collaborate freely to reach all-new heights of understanding whilst the head and heart will collaborate in easy partnership to realise a world in which sense of “other” is no longer cause for conflict. Division lines will soften and blur to allow us to radiate in a whole new way; which will have to be seen to be believed. 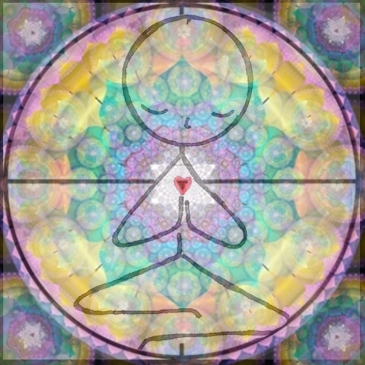 You could say, all division points will be healed, from within our own energy field, our cells, our neurology and our physiology to “out there” in the social and environmental planes of existence, to where we seamlessly hook-up once more with all the off-planet energies from which we came. Because while we remain so desperately fragmented and out of balance, those openings of communication remain off-bounds or distorted to us; so we have only the faintest guess available to us , so far, as to how this could evolve.

Now, at last, as we go into this next stage of our evolution, we manifest a new kind of wholeness…you could say the (w)holiest of whole…since we are now AWARE of that wholeness, having been fragmented into a magnificent kaleidoscope and then come fully back together again, in heart-centred human form.

Helen White is a professional artist and published writer with two primary blogs to her name. Her themes pivot around health and wellbeing, expanded consciousness and ways of noticing how life is a constant dance between the deeply subjective and the collective-universal, all of which she explores with a daily hunger to get to know herself better. Her blog Living Whole shines a light on living with high sensitivity, dealing with trauma and healing from chronic health issues. Spinning the Light is an extremely broad-based platform where she elucidates the everyday alchemy of relentless self-exploration. A lifetime of "feeling like an outsider" slowly emerged as neurodivergence (being a Highly Sensitive Person with ADHD, synaesthesia, sensory processing challenges and other defecits overlapping with giftedness). All of these topics are covered in her blogs, written from two distinct vantage points so, if you have enjoyed one of them, you may wish to explore the other for a different, yet entirely complimentary, perspective.
View all posts by Helen White →
This entry was posted in Consciousness & evolution, Divine feminine, divine masculine, Menu, Personal Development and tagged ascension, chakras, Consciousness, dark and light, evolution, fragmentation, future of humanity, head and heart, healing, healing divisions, kundalini, moon phases, separation, unity consciousness, wholeness, yin and yang. Bookmark the permalink.