I fell head-over-heals in love with Rimsky-Korsakov’s “Scheherazade” as a young adolescent of probably 13 or so, which is when I first starting to explore classical music for myself. My aunt was being put into a care home and I was given access to her considerable collection of vinyls before the rest were given away to charity. I came home with a handful of classical titles; and right at the top was “Scheherazade”. It was played over and over for many years; even the university years and perhaps especially the lonely years during my first marriage. Then I stopped playing it…I’ve no idea why…and it had been a long time since I had even thought of it. Grasping for something new to play on my beloved low D Irish whistle this week, the exquisite melody from the third part came back to me, clear as a bell, and suddenly I was playing it. I’ve been teaching myself pieces of music by ear for a couple of months now, yet why I was suddenly so determined to persist at this difficult to convert piece (given my whistle is in the wrong key for it) caught my attention.

Seeking a version of it to listen to (you can too via the image), the penny dropped as I realised its full title is “The Young Prince and The Young Princess”; I had found my way back to an expression of “yin and yang” or the feminine and masculine expressed in a piece of music!

Looking more deeply into Rimsky-Korsakov’s inspiration, I learned that he strove to convey a feeling of the Arabian Nights without nailing the score to a particular set of stories, wanting the listener’s imagination to fill in the blanks more so than dictate any particular narrative. The name “Scheherazade” was landed upon and kept as the overall title as it offered-up this strong flavour of the orient, helping to prepare the expectation of fantastical themes, the essence of the well-known voyages of Sinbad and a fairy-tale quality throughout the music without telling a particular tale (since “Scheherazade” is everything to do with the telling of a great many tales; far too many to single out). In other words, he offered a structure within which the listener could fill in the spaces with their own imagination. Again, yin and yang at work; the well-defined parameters set and yet plenty of room maintained for the most expansive and unlimited of experiences to come and go at will.

There had to be something synchronistic in this “many tales” aspect coming up to meet me so pressingly after all these years, right at this time. So I reminded myself of the story of Scheherazade, the princess married to a sultan who was resolved to spend one night with each of his brides before beheading them because he was so convinced of their inevitable infidelity. For over a thousand nights, by the time Scheherazade comes along, he has bedded then beheaded each of his new wives; however, Scheherazade has her wits about her and breaks this chain of events. She tells the sultan a story so riveting and fantastical that, when she declares she will need to continue on to its conclusion the next night as dawn is now starting to break, he allows her to live on for “just one more night” so that she can finish her tale. Of course, he then begs her to tell another story…and another, and another, for 1000 stories, over the course of 1001 nights. In the end, the sultan is so in love with her that, of course, he allows her to live on though she has completely run out of stories.

So, here we are right now as a human race…at the end of what feels like 1001 nights and then some; an awful lot of “human stories” having been told across the history of mankind. These long running, always somewhat overlapping, tales about ourselves and who we think we are have kept their own momentum “night after night” and held us gripped for as long as we can remember and yet it feels like we are running towards an abrupt endpoint or risk just repeating the same old stories over again from the beginning. In fact, it is starting to feel like that…isn’t it? What honestly feels “new” in the news. We are just repeating what we have seen many times before and it feels old and done with yet how do we agree we must stop since we already know the outcome; what is this momentum that keeps us pressing replay on themes we have seen repeated and already know the ending of? Is it that, at some level we too have reached the 1001th night and fear to stop…for what then? What, in particular, waits there in the stark light of dawn for the feminine aspect? She has her own vested interest in the process of continuing to spin her tales since it is what has kept her alive in a masculine world fixated upon mistrusting her. Meanwhile, the masculine element (as well we know) has become embittered, cynical, harsh and unrelenting as a result of “history”, preempting its own deeply embedded vulnerability by lashing out first at every opportunity. At the global level, in our culture, our sciences and deep within ourselves, we have this “strike first, ask questions later” mentality that becomes dogmatic if we let it get out of balance. It tells us it is here to protect us, to safeguard our interests, to be the insurance policy, to keep us safe but really it perpetuates the telling of the same old stories for fear of what lies at their end. Does it still distrust the feminine aspect or has a softening started to occur? Has the feminine aspect gained the masculine’s ear? 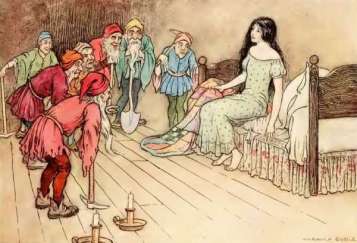 If we are to learn from the story, the feminine overcomes the masculine’s doubts by gently, patiently earning his trust whilst encouraging him to invest in the same “ending” that she is able to deliver. Her special gift is to be able to envision, and paint the picture of, “new endings” that the masculine is not necessarily able to reach via a more logical path; taking them both there if she is able to engage him with her embroidery of what is possible. By the end, both masculine and feminine want the same things…to reach the new end to the story, together. They become whole as they yearn for this single outcome, each contributing their part; the weaving of the tale and the eager reception of what is offered. In effect, a role reversal has taken places as the feminine has become the assertive aspect and the masculine is the receiver of what is told…and so they intersect in perfect union. Both have to be prepared to face up to the fact there are no new endings to the stories they have both already heard; they can only move on by overcoming each of their fears (both equally vaid…yet together, they neutralise) creating a brand new story, together. This is where we are at, as a human race. It is time for the feminine to offer and the masculine to put down its arms and receive what will deliver both to a unified conclusion, which is wholeness realised.

When we engage the masculine aspect in our vision for the future of the world; when we keep it wanting more; when we encourage it to value what the feminine has to offer including its vision for what is possible; when the masculine element is prepared to put down it arms in its eagerness to find out what happens next; when it is prepared to bide its time and receive feminine wisdom for long enough that heads are cooled and a new outcome birthed; when it is as excited about receiving the next installment of our human story as the feminine is excited for the brand new world that is coming…THIS is when we get these two aspects to work closely and harmoniously together, to the benefit of us all. Thus we all get to witness the sun rising on a brand new kind of a day; you could say, happily ever after for everyone. Even when all the stories have run out.

The clues have always been there in countless hand-me-down stories. In this illustration from The Fairy Book (1913) “Little Snowdrop” (Snow White) tells fantastical stories with a new ending to little old men (dwarves) that have spent eons digging “the hard way” for what they think they need (the sparkle of gold). Her own tale leads to union with the young prince (sacred masculine) who comes looking for her when no one else can bring her back to life from a state of suspended animation or “being kept on ice” as though obsolete; a reunion of yin and yang to make everything whole and, thus, reinvigorated with life-force again. The story of Snow White has always held a very deep and personal resonance for me as an archetype I know I work with.

Helen White is a professional artist and published writer with two primary blogs to her name. Her themes pivot around health and wellbeing, expanded consciousness and ways of noticing how life is a constant dance between the deeply subjective and the collective-universal, all of which she explores with a daily hunger to get to know herself better. Her blog Living Whole shines a light on living with high sensitivity, dealing with trauma and healing from chronic health issues. Spinning the Light is an extremely broad-based platform where she elucidates the everyday alchemy of relentless self-exploration. A lifetime of "feeling like an outsider" slowly emerged as neurodivergence (being a Highly Sensitive Person with ADHD, synaesthesia, sensory processing challenges and other defecits overlapping with giftedness). All of these topics are covered in her blogs, written from two distinct vantage points so, if you have enjoyed one of them, you may wish to explore the other for a different, yet entirely complimentary, perspective.
View all posts by Helen White →
This entry was posted in Consciousness & evolution, Culture, Divine feminine, divine masculine, History, Life journey, Literature, Menu, Music & theatre, Personal Development, Writing and tagged allegory, arabian nights, end of conflict, evolution, heal the world, human race, masculine and feminine, Rimsky- Korsakov, save the world, Scheherazade, snow white, stories of humanity, unity consciousness, wanting the same things, wholeness, wisdom in ancient stories, yin and yang. Bookmark the permalink.