Yesterday was hot, so hot that it was almost too much for my dog to be outside so I walked him slowly around a small patch of a green that I hadn’t been to for years. Right next to the bench where I used to sit…all those years ago…was the most magnificent oak tree, a huge tree out of scale with the little park, with an expansive canopy of branches and young leaves that extended many feet in all directions like a monumental green umbrella. Such a stand-out tree that, really, I was startled since I felt like I had never seen it before in my life. Truly, I knew I hadn’t registered it at all…though I had sat on this very bench countless times in all seasons. But then, that was before I “woke up”, being around 7 or 8 years ago. Still I was amazed; had I really not noticed things as immense and as impossible to ignore as this, which must have somehow merged into the background of all the other trees back in those days. Now it was as though it had a halo of light demanding “look at me”, its whole energy a magnet-draw for the attention; but then, this is what life is like when you are awake. You see so many things, all of the time and not only with your eyes but all your subtle senses. Certain things draw you to them and deep knowingness comes easily your way, asserting itself on your path. Before, pretty much everything except what was ranting and screaming at me was all a blur of background colour; and all those colours ran together into sludge. I was startled to be shown just how different my life has become, how I had evolved in a relatively short period of time and how magnificent the transformation.

That night, some time after midnight in the energies of the new moon, (and not for the first time…) my teenage daughter nudged me awake from a deep sleep. She had a heat stroke headache of monumental proportions. Creeping up on her just before bed, when I had given her skullcap and told her to drink water, it now had her clutching the sides of her head groaning in pain and had gone to her stomach. She felt nauseated and was belching repeatedly like a bullfrog; almost funny, even to her, but really not since she couldn’t help it. As I nursed her better with every remedy I have, the sound of her frog croak took me back in a time tunnel to another life. Her “ex” father as I think of him, of the same Celtic fairness, used to suffer from the sun just like that, making that noise. All year, he spent his days in a dark “cave” consisting of his office at work, or the bedroom with drawn curtains where he played computer games, or the pub where he virtually lived, or a car driving to where his legs could otherwise take him. Then, on our annual holiday, he would suddenly launch himself into a deckchair on a beach to stare at girls in bikinis, hour after hour, turning lobster coloured around his sunglasses. Around the calendar, I would have put up with our excuse for a relationship, telling myself it “wasn’t so bad” though really it was only because we saw so little of each other (him living in “caves”) that his abuses got lost in the aloneness that was my norm. When the much looked-forward-to holiday came around, from that first day spent drinking in the sun for more hours than his skin could cope with, he would give himself constant heat stroke and sunburn and become a bear with a sore head. I would spend my time nursing and waiting on him to endless verbal, often alcohol fuelled, abuse only for him to do the same thing again and again, his mood getting fouler by the day. By the time we got home, I would hate him with a vengeance and be more resolved than at any other time to leave him…but then, two rainy weeks into “normality”, I would just seem to forget my resolve and the inconvenience of making the break would wipe away all my courage and intention. All my motivations blurred to become a muddy sludge of brownness and excuses in which one reason to do something was as good as another. I marvel now at how deeply asleep I really was, like a living coma of unresponsiveness and amnesia; how my life once looked like a painting that had been left out in the rain.

It took the searing, tearing, screaming pain of labour without anaesthetic to wake me up from all that. With the first disconsolate yell from my daughter’s lungs, its as though I sat-up sharply in the ill-made bed of my life, woken from a nightmare of paralysis, and coughed my own first life breath; a rebirth of sorts. But then it was the end of 1999; she had brought with her the Eighth Wave as so many of our so-called Generation Z did at that time. After that, the wake up was easier if often inconvenient (there could have been no worse time for me to realise how dire my life was, left holding the baby…) yet it still happened relatively slowly, even then. Looking back, I had about one year on, one year off of making steady progress, small increments, tiny baby steps in my own reinvention for those first few years… but I was certainly seeing more, feeling more, knowing more and daring more, as though all the lights had suddenly turned up in a dimly lit room. The result, in hindsight, was a life reinvented but at the time it was evolution more so than revolution; well-paced and almost accidental seeming. Yet only four years along from this and it was just me and her living alone in quite another world..and the rest of a much better life spread out before us. I had made more trajectory changes in that one short period than the rest of my previous life put together. 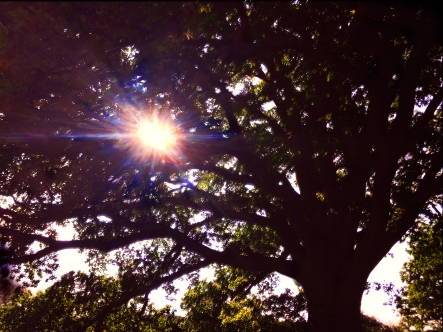 Just looking at the everyday evidence, quite apart from all the enhancement in life’s minutest details, all the beauty noticed and so much clarity, its as though time has speeded up to a whole other pace compared to those earlier times of sludge. It moves along quite differently to those years when life was lived like a goldfish; neither bored nor surprised at seeing the same old fishtank sides and certainly never questioning why they were there. But then we are into the ninth wave now and everything is happening soooo much more quickly again, the evolutions coming thick and fast (oh, about every 36 days…) appearing as upgrades that make me feel like 6 months was another lifetime ago, so much does everything reinvent, again and again and again. Is this a trick; are we just designed to always think we see more, feel more, know more today than we did yesterday? Can I really tell all these changes happened, do trees really look any different to my eyes (perhaps it took the slow steady growth of the tree that hasn’t changed so very much…only my perception of it…to show this) and are my evolutionary spurts so much more than a “nice” academic theory? In my life, oh yes, yes they are but yesterday seemed to want to show me some particular things, just to make sure I grasped the leap that has been made; seeing even what those earlier contrasts were here to show me in their own perfect way. In short, I was given another opportunity to appraise just how beautfully designed my whole life has been and how much I have woken up, already. Though the two decades this transition has taken could feel like a very long, slow yawn, the most recent months have been like the part when you vigorously rub the sleep out of your eyes, your head clears and the room seems suddenly a-dazzle with colour and interest; and all the promise of a brand new day.

For more about the eighth and ninth waves of evolution, see my post Using the Nine Waves to Heal Your Life

Helen White is a professional artist and published writer with two primary blogs to her name. Her themes pivot around health and wellbeing, expanded consciousness and ways of noticing how life is a constant dance between the deeply subjective and the collective-universal, all of which she explores with a daily hunger to get to know herself better. A lifetime of "feeling outside" of mainstream...slowly emerging as Asperger's Syndrome, Ehlers-Danlos Syndrome plus a complex of co-morbid health challenges, being a confirmed Highly Sensitive Person and an INFJ personality type, not to mention born under an out of bounds moon (need I go on) fed into the creation of Living Whole; a self-exploratory blog fed by a wide angle lens tilted at "health and wellness" topics. Meanwhile, Spinning the Light is a free-for-all covering a multitude of playful and positive subjects about life in the broadest sense...written with a no-holds-barred approach. Needless to say, their subjects cross over quite often.
View all posts by Helen White →
This entry was posted in Biography, Consciousness & evolution, Divine feminine, Health & wellbeing, Life choices, Life journey, Menu, Personal Development, Spirituality and tagged awareness, Consciousness, generation Z and the eighth wave, getting out of a rut, getting out of hopelessness, humanity waking up, leaving disfunctional relationships, personal evolution, reinventing yourself, The Nine Waves of Creation, the ninth wave, the waking-up process, transformation, transformation through childbirth, wake-up world, waking up, waking-up call, what does evolution feel like in life. Bookmark the permalink.

3 Responses to The long slow yawn