On the crest of a wave

A couple of days ago, I attended a thirty years reunion at my university with an intimate group of people from a core of us that first met in October ’86 in our hall of residence. Part of me was filled with trepidation, even resistance, at the idea of winding back the clock and yet the feeling, afterwards, was quite sublime…So much so that, when I got home, I set up a deck chair in my chilly February garden and tilted my head back for an hour’s quiet reverie with the lasts rays of the sunset on my face. Something more than just the surface level of “reunion” had just taken place and I knew I needed time to integrate. 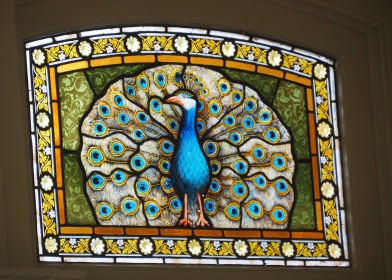 As good as it was (actually) to be reunited with these people after all these years, it was primarily  a sense of being reunited with myself that had swept me off my feet. Somewhere in the corridors and corners of those old-familiar places, our accommodation in those first heady months of playing at being adults in a safely accademic world, I found many remnants and clues of an earlier draft of myself. In stepped a ghost of a “me” that I had, at some point, left behind and, in our reunion, I only felt more completeness, not the regression I might have expected. Then in those hallowed spaces, gazing up at the peacock light that used to fixate me as the last rays of evening angled through the library door, I also found aspects of who I am “today”, things that hold far more meaning now than ever, so that I know how I must have sent these clues “back” to that younger self, like a guide to my own future.

Since that time, I have been through more than one life-moulding trauma and I see how I had, at some point (I thought), swept away the debris of that earlier version of self, believing there was nothing more than ashes left where her innocent and optimistic perspective used to be. These people once knew one of the players associated with my later trauma and so I also see how I detached from them, in part, to avoid dragging them into my political mess or sullying the fond memories we all shared together with what later “went wrong”. In other words, I exiled myself in order to avoid making waves…only to ride some of the biggest waves of trauma alone in the subsequent years.

Yet I also see how all the events that occurred to me in the ’90s, seemingly tipping me off my Eighth Wave perch (again, I refer to The Nine Waves of Creation, my favourite book of the moment), were a Sixth Wave backlash that – at an evolutionary level –  I “signed-up for” as the necessary entropy required to grow me ready for the next incoming wave of evolution.

In finally getting this important thing about the events of my life, I realised that not only am I on the crest of a wave now but that I always have been. Like all waves, the wave of evolution that I am “on” has risen up and sunk back down in ever varying undulations that can seem daunting, terrifying, even destructive, at very close-quarters and yet it never once stopped being the formidable, life-affirming beauty that every wave truly is seen from afar. That wave has transitioned now so that it rolls back and forth to a somewhat different rhythm and speed (much faster, in fact) and yet it feels far less pernicious; not least, because I have gained this overview.

I realised more fully than ever that I have been doing important work all this time, seeing in my own version of a new era – as all of us are doing in our own unique way, played out as the stories we so often tell ourselves are nothing more than the random accidents of circumstance sweeping us along as the unwitting “victims” of chance. Not so, and I have never before attained such a sense of coherence and reconiliation as I am now in possession of in my own life (which is where, in all cases, it really matters in order for us to co-create a “new” world).

This new level of understanding lays me to rest like no other completion moment thus far (though there will be more up ahead); hence the sublime feelings that, two days later, I still find coursing through every cells. Through my reattachment with a largely unscathed “earlier” version of self from three decades ago, I find a new level of joy is sweeping in…not becuase I have erased or even hidden all the events of the years in-between but because they are now fully integrated with the whole that I am.

Important to clarify: these people with whom I so enjoyed reacquainting myself don’t hold the only key to this me that I so like the feeling of. I don’t need to become bosom friends with them all over again; this isn’t what it is about, though I would like to stay in touch. This itself is a key thing to understand about times when a “visit to the past” feels so good to us, like we have found ourselves in our nostalgia, otherwise we can be led into thinking we “need” to kindle all sorts of old flames in order to be who or what we long to be. Newly enamoured with feelings from our “past”, we can trick ourselves into believing these external things are some sort of portal to our wholeness. No, they have simply been the catalyst to our own inner journey in consciousness and we can sometimes come across what feels like a whole treasure trove of selfhood in one particular era of “time”. This can be a clue to an oportunity that awaits us in (typically) a Night phase of the Ninth Wave – as we are currently in (see the Ninth Wave calculator HERE). I notice how I seem to have reached a 30 year portal in more ways than one in the last few days as I am also re-appraising some creative aspirations I had back then, which I thought I had let slip away but with which I now find I have unfinished business.

Playing with “time” in this super-conscious way can be such a powerful modality and we can do it using all kinds of reunions as prompts, whether going back to a particular place or listening to a piece of music that opens up our memory box. We find we didn’t so much “misplace” or “abandon” certain aspects of ourselves in those times as leave them there as a quantum marker that becomes meaningfully entangled with our “now” just as soon as we rekindle it with our consciousness, like watering a dessert seed and watching it spring into life again. That latent potential can rise up again if given the “water” of our attention yet will become quite a new version of itself, this time around; mixed in with all we have become since we first planted it, which is a quantum superposition enacted as our most intimate human experience. These personal evolutions at the quantum level (see my post Going Quantum) are how we are – each and every one of us – poised to transform literally everything we have come to experience in our history thus far, both individually and as one.

This post, of course, makes reference to the Nine Waves of Creation and will make most sense if read in conjunction with my earlier post  Using the Nine Waves to Heal Your Life and, preferably, reading Prof. Calleman’s extraordinary book.

Helen White is a professional artist and published writer with two primary blogs to her name. Her themes pivot around health and wellbeing, expanded consciousness and ways of noticing how life is a constant dance between the deeply subjective and the collective-universal, all of which she explores with a daily hunger to get to know herself better. A lifetime of "feeling outside" of mainstream...slowly emerging as Asperger's Syndrome, Ehlers-Danlos Syndrome plus a complex of co-morbid health challenges, being a confirmed Highly Sensitive Person and an INFJ personality type, not to mention born under an out of bounds moon (need I go on) fed into the creation of Living Whole; a self-exploratory blog fed by a wide angle lens tilted at "health and wellness" topics. Meanwhile, Spinning the Light is a free-for-all covering a multitude of playful and positive subjects about life in the broadest sense...written with a no-holds-barred approach. Needless to say, their subjects cross over quite often.
View all posts by Helen White →
This entry was posted in Biography, Consciousness & evolution, History, Life choices, Life journey, Menu, Personal Development, Remembering, Symbolic journeys and tagged achieving wholeness, conscious living, entanglement, evolution, healing your life, making sense of life, making sense of trauma, meaning of life, ninth wave, nostalgia as evolution, quantum experience, reconciling the past, refinding your innocence, reuniting with aspects of self, superposition, The Nine Waves of Creation, time portals. Bookmark the permalink.

3 Responses to On the crest of a wave