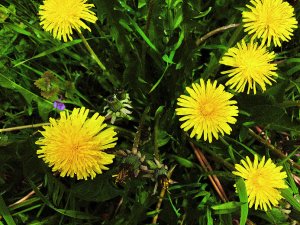 As I bent down to snap these photographs of the dandelions growing in the hedgerow, I could still hear my mother saying “don’t go near them…don’t touch” whenever my childish hands reached out to caress these sunny-headed  “weeds”. When I asked why, she would simply repeat the stock response, no doubt handed down from her mother or grandmother, that they would make me “wet myself or need the toilet”…reference to the powerful diuretic powers of this multi-faceted hedgerow healer. In hindsight, I see how the core information was correct – yes – yet the emphasis had become all distorted because there is nothing “bad” about the dandelion; in fact she was once so  highly prized that dandelion root stock was carried as essential cargo by settlers to the New World. Whatever has happened to her reputation since is just a load of hogwash (sadly) perpetuated from mother to daughter as well as so much exaggeratedly bad press from the kind of gardeners who, like my father, were obsessed with keeping their marigolds in neat regimental rows. Its as though so many Victorian gardeners, doctors and pedlars of new-age drugs spread grossly distorted rumours to disengage the women from their herbal know-how to keep their own tightly organised “patch” of existence in orderly line.

More recently I have considered why these sunny yellow flowers are still not more prized than they are, seldom included (for instance) in even a rustic bouquet or worn in the hair like the equally humble daisy; does it all still come down to the kind of cultural entrainment that I was subjected to as a youngster? Are people still so slow to shake off those kind of vicious rumour, the kind that make them deeply suspicious of something or someone, long after there is any reason why? After all, the whole plant of the dandelion is useful and even edible, great for detoxing, blood sugar and balancing hormones plus a whole load of other health benefits, including for your garden (here’s one of many articles explaining why); so many uses, in fact, you would think we would all be growing them! 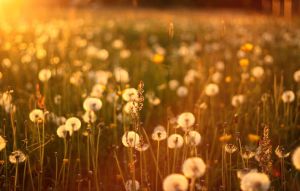 Still, they mostly exist on the sidelines, in pavement cracks, in places where people don’t tend to go…yet there’s something about their quietly determined presence in the most ordinary and overlooked of places, as though they are there as a reminder of our own commonality; those things we all share outside of our cultural differences and the niceties of our own back garden (assuming we even have one). More recently, they have come to represent to me that whole subset of things that have been similarly marginalised…many of them associated with our femininity and the kind of Nature-oriented, joined-up knowledge of how the remedy never grows far from the ailment; something we have struggled to keep alive, against all the odds, across centuries of matters being taken firmly out of our own healing hands. Think of all those countless other blacklisted herbal cures that we are still told to avoid…from hemp to wild yams and all those many other sources of natural hormone or anti-inflammatory poo-pooed by an industry that denies their effectiveness while pedalling dubious chemical alternatives (because anything that grows so freely cannot be patented and sold for profit). Think equally of all those girls shunned at school because they are a little different to the rest; of countless women cold-shouldered in their community for possessing unusual insight or “unconventional” healing skills…for these are cultural traits both ancient and modern, cliché yet current. If this stuck old pattern describes what many of us have been through, then dandelion shines out like a quietly unassuming symbol for us all.

Often it turns out that the very thing that has been most marginalised could have been the most useful thing of all…but here’s the gift in all that long-time’s shunning. The dandelion, like the archetype of those things we were told were so “dangerous” (because they threatened to reunite us with our own inherent power, our wellbeing and most natural source of self-healing) has remained fully her own person and firmly in her own power across all those years of being shoved to the sidelines…a steadfast reminder of all that was still ours to reclaim as soon as we were ready to. When that time comes, we can see all too clearly that she has been just like us, in so many ways…shining her sunny light in dark corners, biding her time under the cloak of cultural invisibility and quietly sewing her abundant seeds with an absolute diligence that is legendary; an archetype amongst seed sewers.

Meanwhile, untamed as she is, nobody has messed with her most natural inclinations or cultivated her into being anything that she is not because her very shunning has left her all alone, to do what she does best without any interference. Considered too unimportant by far to be given the time of day, she has remained on the sidelines, nodding her vibrant head beneath our very noses, relentlessly shining her sunny demeanour for all who are prepared to recognise her…that’s the children and the most beautifully childlike amongst us (because our lack of sophistication has kept us most true to who we really are). Beneath the spreading oak and thorny bird-chattering hedgerows, she has continued to dazzle all those who are wide-awake enough to see her there, like a sea of miniature sunshines when the darkening skies would otherwise turn everything gloomy.

Relentlessly, without pause, across time-immemorial, she has continued to scatter her silken seeds into the wind, season upon season…regardless of whether anyone was there to watch her doing it, to clap or to care that she was so committed to this task of showing us how it can be done. That is, how to disperse our own fragile parachutes of light so gently, subtly yet oh-so-effectively upon the everyday breeze of our lives and then sit back to watch as a whole other field of sunshiny heads start to appear in the most successful amplification initiative of all time…for we each get to magnify and multiply all that we are about many many times when we sow tiny pearl-drops of everyday light in this way. Suddenly, we find, we are in a sea of radiant heads. Perhaps it is this quiet, passive effectiveness that makes her one of the most feared of all the most gentle souls, hunted down and chemically pursued by those who would have their gardens grow in tightly-controlled rows…for she is organic through and through and will go where the whim of the moment takes her.

Being nobody’s flower we find that…when it really matters…she is actually everybody’s flower and that she is modelling that possibility for all of us, as the divine feminine in form; helping to remind us how to find our own way back to an old-familiar place that, just like the winding pathways of most purposeful living along which she has always thrived so well, we never (really) strayed very far from.

Helen White is a professional artist and published writer with two primary blogs to her name. Her themes pivot around health and wellbeing, expanded consciousness and ways of noticing how life is a constant dance between the deeply subjective and the collective-universal, all of which she explores with a daily hunger to get to know herself better. A lifetime of mysterious health challenges...slowly emerging as Asperger's Syndrome, Ehlers-Danlos and a number of co-morbid conditions...fed into the creation of Living Whole; a self-exploratory, self-researched blog on the subject of health and wellness and ways of managing, improving and learning from such chronic health conditions. Meanwhile, Spinning the Light is a free-for-all covering a multitude of playful and positive subjects about life in the broadest sense...written with a no-holds-barred approach. Needless to say, their subjects cross over quite often.
View all posts by Helen White →
This entry was posted in Menu. Bookmark the permalink.