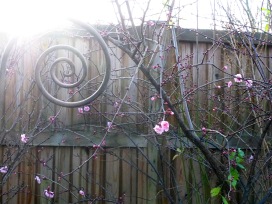 A glance into the garden and there it was, defying the eyes, arresting the thoughts. The fourth day of stony January, the New Year barely started and its petals were unfurled like gentle wings to the slate grey sky.

Yes it had been milder than usual, you could see the tree’s point and yet January still intended to proceed with all its yo-yo unpredictability, offering no guarantees that it would make this particularly easy. True to form, one day arrived with springlike warmth; many more arrived vicious, drenching, bitter and raw. Whilst my heart couldn’t help but skip with all the renewed optimism that this brave little cherry tree seemed to be encouraging, I watched with awful trepidation as it unfurled tender sails in the hope of a speedy transit across the year’s still waters; trembled at its apparent naivety. What if these waters threw up hidden rocks, malevolent currents or sudden storms? What if a cold snap sent the tree’s early vulnerability into trauma, stunting a whole year’s growth before it had really got started? These “what if”s sounded familiar – the ghosts of many seasons’ thoughts buried deep in human DNA; the cursory tales of many lifetimes.

Still those gentle blooms held up determinedly, unfolding a few more petals every day as though to capitalise on the sheer intensity of laser light rays that angled in over the garden wall during January’s acute slant down to early sunset. The darker and more contrasty the days, the more the unexpectedness of this afternoon display caught the eye, an out-of-season penny show to make the jaw drop and hold the attention in a way that March blossom and more commonplace light conditions never had.

Still this stunt felt dangerous, seemed foolhardy; why rise so early from sleeping months and risk everything for such a daring feat of showy timing? Why the pressing urgency? Did it know something I didn’t, had it heard the starting pistol, received the signal, been slipped the secret cue that something big was underway; something that could contain itself no longer but must “out” into the light? Or had it simply felt it must take that leap of

faith, be the one to demonstrate, through actions, that it dared to be all today that it had hoped to be tomorrow so that others would also believe this was possible and much more so than just through the endless repeating of words? No more waiting. No more striving. No more hoping and trekking and aiming and intending and visualising but BEING it. Did it want to manifest what it already knew to be so in its heart’s potential, to bring it out of hiding and into that light, however cautious and conditional these times still urged it to be, however much of a mixed blessing the sheer intensity of that light it was reaching out into could sometimes feel? Had it decided there was no more time left for slumbering underground, its tenderness tucked away inside dry woody branches?

As if to make this point sternly, the night’s cold crystallised, the high winds that shook walls rebuffed the tender optimism of buds newly opened, then morning’s frost bit hard into their edges and the rising sun melted ice into chilled water that beaded on petals and magnified the burn of the afternoon’s intense light onto their velveteen softness…Yet sepia-tinged edges only seemed to enhance the beauty of these blooms. Their world-weary wounds lit up in the amber hues of setting sun and made these petals seem even more a part of the light, as though directly from the light, the earthly manifestation of the light turned into something that could be touched, related to and understood as a living thing. Their vulnerability and openness to suffering made this supremely so, just as their resilience and unwavering optimism encouraged like nothing else that had ever grown in that garden before.

In the redeeming morning light after each of the ‘nights before’, the robin’s daily trill from its branches seemed to herald another layer of fear dispensed with by the tree, yet another era of leaden beliefs and unfounded fears dropped away and dissolved quite out of sight as illusion because the biggest truth of all was that the tree with all its blossom was still here, all intact. Quite startlingly, the scatter of dropped petals beneath its branches would hardly have made for a sleet-shower most mornings and still the blooms continued to open, to thicken and to thrive; quite the uncountable crowd now, a zillion bobbing heads held up to the light.

A month on and the blossom was still there, more profuse than ever…had it ever lasted this long before? Almost two months now – still there if more vivid, more self-assured. Day after day, it began to look less seasonally out of place; it felt as though the other plants in the garden were staring at it rather less but, instead, feeling encouraged to join it in its “early” audacity. Its “firstness” had all but been forgotten yet the tree didn’t mind; it sought no recognition for having dared. Now, snowdrops arrived in the thickest carpets yet and, suddenly, daffodils were side-by-side with them, joining the early party, already in full bloom before the end of the year’s first month. Then came crocuses, marigolds, dense carpets of bluebell leaves promising very early

flowering, more white froth in the hedgerows and the waxen chalices of magnolia blooms held up against the sky, cupping the light in great handfuls that said “give me all you’ve got”. The audacity of that softest first blossom had been contagious, it seems, and the mocking and incredulity had died down to become the bandwagon that everyone wanted to be on. The whole of Nature was now marching to a different tune and an exhilaration began to lift in the air like a laughter that can’t be suppressed.

The birds knew it too; were such a part of it, the very messengers of it…flitting it from branch to branch, calling it excitedly from the skies, singing it in intricate new melodies and in ancient ones remembered; ones which activated the soul of all who heard, like a fanfare shouting “come on now, its time”. All their songs were as out of season as the

blossomed branches and yet they had never felt more on-time, more ready and in the know of something momentous.

On the first day of February, the seasonally misplaced song of a skylark rang out high above the hill slope against a leaden winter sky. This most beguiling melody is the summer distraction, so they say, that keeps all eyes and ears focussed way way above the ground while precious new beginnings become established in a nest tucked down below. And so, again, while we follow our gaze upwards towards nature’s best displays, our tenderest new creations get to take shape down below; to gain an early headstart and to gather strength and momentum, the nurturance that assures life and a foothold in the rich soil of life, tended into a reality that we can come to know as ours. For our dreams are no other than such new growth calling for tender care and nurture along with the belief that they are ours to get started upon just as soon as we dare to shine and celebrate them into life.

At this unique time, it feels as though there is an ever stronger heartbeat sounding through the earth, through the very soil and into roots, pulsing into bulbs and sucking up into grass blades and shoots, into literally everything that keeps one ear to the ground and another to the sky. To its life-affirming rhythm, so many of us seem seem to have awakened from our slumbers a step earlier than the old pattern and are daring to tell ourselves that this is alright now, we are perfectly on time and there is no need for fear or hesitation. All our tenderest imaginings are ready to be born. “No more sleep, for hiding, for waiting” it seems to say, “we’ve done many lifetime’s fill of that…time to take a leap into the unknown and wake up to all that we already know that we are, right here and right now”.

To see more photography of the early-blooming cherry blossom, you can view this slideshow on my photography website (click image):

Helen White is a professional artist and published writer with two primary blogs to her name. Her themes pivot around health and wellbeing, expanded consciousness and ways of noticing how life is a constant dance between the deeply subjective and the collective-universal, all of which she explores with a daily hunger to get to know herself better. Her blog Living Whole shines a light on living with high sensitivity, dealing with trauma and healing from chronic health issues. Spinning the Light is an extremely broad-based platform where she elucidates the everyday alchemy of relentless self-exploration. A lifetime of "feeling like an outsider" slowly emerged as neurodivergence (being a Highly Sensitive Person with ADHD, synaesthesia, sensory processing challenges and other defecits overlapping with giftedness). All of these topics are covered in her blogs, written from two distinct vantage points so, if you have enjoyed one of them, you may wish to explore the other for a different, yet entirely complimentary, perspective.
View all posts by Helen White →
This entry was posted in Birds, Consciousness & evolution, Divine feminine, Gardens & gardening, Life journey, Nature, Personal Development, Photography, Seasons, Spirituality, Symbolic journeys and tagged audacity, awakening, being first, birdsong, blooming, blossom, daring, daring to be, doing it now, evolution, letting go of hesitation, light, nature waking early, new beginnings, no more fear, no more waiting, of the light, opening, optimism, ready, rebirth, seasons, seasons coming early, shining your light, spring, start, transformation, trees, vulnerability and pain. Bookmark the permalink.

2 Responses to The blossom opened early…