Having just made the long-planned trip to see Paul Cummins ceramic poppy installation at the Tower of London, my challenge is now to adequately describe how overwhelming the experience was (and in ways I couldn’t have anticipated in my previous post on the subject). I went there intending to witness the long-claimed symbol of so much bloodshed being reclaimed and returned – by art – into the thing of beauty I most associate with the late summer poppy fields of some of my favourite walks, and this stunning display did all of that (and it was a breathtakingly spectacle). Yet there was a side-effect I hadn’t banked on and it was this: the whole experience played out like a metaphor for the very human experience that got us to this, playing out like a rite of passage to ‘the other side’ of something and to the threshold of a new beginning.

As we, the crowd, poured out of the ‘tube’ exit in unison and moved as one onto the pavement, there was much blinking of eyes and bewilderment in the bright light of the unfeasibly sunny and warm October day; the universal query being “where do we go, what do we do”. The woman behind, who was almost pressed flat against my back in the heaving throng, expressed the same observation to her family that was now playing through my head (briefly joining us in camaraderie as we shared a moment of ironic laughter): “I thought we would just take a quick look and leave again”. One glance at the swarm of people ahead told us all that another few steps forward would mean we were committed to this and in for the long haul; sucked into the current of a long and unpredictable portion of LIFE in a maelstrom. Were we up for this? I know I wasn’t the only person to feeling hesitant and wondering whether we should have chosen another way to spend our morning.

There were such immense crowds of people, getting  denser with each passing minute, that it was hard to take in the sheer volume of bodies or the combined energy of them all crammed into one relatively small and seemingly predetermined place (having, as it did, many crash barriers in position ‘for our own safety’ which made the walkway appear incredibly narrow in places). With so many of them clearly seeking some sort of direction from ‘the organisers’, (whoever they were; no one of that authority ever seemed to show up), a great deal of confusion ensued, with people trying to move in completely different directions to each other, then refusing to back down or surrender the square-footage they had gained, so becoming completely stuck in the narrowest, most concentrated parts of the walkway, which only ‘locked up’ as a result.

Then there were those who, seemingly oblivious to others around them, just stood there looking vacuous for the longest times, not even seeming to be taking in what they were here ‘to see’, as if their overwhelmed thought-chip had crashed and switched off, triggering a ripple effect of further ‘stuckness’ all around them.

Others became so fixed on getting their best shot or that all-important selfie with a backdrop of red that they seemed oblivious to (particularly smaller, more vulnerable) people around them; so my slightly-built daughter got pummelled around and was used as a virtual tripod at one point, contorted into a most uncomfortable stoop by the hefty lens placed over her head for the duration of someone else’s perfect shot. Inevitably, a great deal of claustrophobia and irritation played out in the crowds and, as we got more into the thick of it, factions of vocalised discontent began to break out.

But then, of course, the up-side of human spirit rallied as some of us, finding humour to be the most appropriate common denominator to work upon, started to crack funnies to keep everyone’s spirits high. Enjoying some more camaraderie with a group of women just behind us and with a bit of the nation’s characteristic slapstick to encourage us along, we heckled and laughed our way to the turning point where we were finally able to break free of the tortoise queue we had been caught up in and scramble our way to freedom over the newly pruned shrubs, hopping from step to makeshift step up the bank. It felt wonderful to regain the free use of our legs and we took strides to move away from the crowd as quickly as possible, relishing the liberty to go where we wanted now whilst appreciating how universal this elation was amonsgt everyone else who had been there with us; everyone seemed to be in good spirits.

The over-spilling streets then presented to the senses as though a premature lunch-party had descended. Barely past midday, every single eatery was packed to the rafters and spewing onto pavements, with hoards of people tucking into full-blown, hearty meals of the fish and chips variety, as though with all the relief of an eleventh-hour reprieve followed by the opening of life’s eat-all-you-can buffet. Far from immune, that same vibe swept over us so that – ignoring the fact that we had pre-paid tube tickets in our pockets – we were soon to be found sitting in the, recklessly flagged down, black cab that had been asked to take us away from the scene and deliver us straight to the doorstep of the lunch we were now absolutely ravenous for and then an afternoon of something that felt altogether more gentle.

Looking back, I realise, not one single tear or moment of pathos had been played out to my eyes that morning; so perhaps the group consensus is that we have all, quite simply, had enough of all that.

In all seriousness, there was something about the whole experience of visiting this art installation that felt like we were processing through something, or like it was processing through us; it was profoundly exhausting at the cellular level and we felt weary to our boot straps after less than an hour’s procession along the viewing route, though the October sunlight provided us with an immaculately timed show of rainbow lights and orbs cascading over those heavy heavy walls the whole time we were there. So were those same walls really “blood swept lands” (as they are ‘officially’ called) or were these poppies dancing in the breeze? In my mind’s eye, the weathered old bricks of this time-weary place were quite awash with love and even more love was pouring out of its window. In fact, as I play the experience back in my mind, it does feel like a whopping-great-big transformation, a mammoth ‘symbolic healing’ of so much gravity and history, was playing out before the eyes like a veritable pantomime and I could sense that we weren’t the only ones plugging into that vibe; the sheer number of people attracted to this installation speaking volumes about how, at some level, its medicine is deeply craved by the masses, perhaps to make light (through colour and through spectacle) of all that has become such a burden to the human psyche for oh-so very long.

As with all the best installation art, the spectators turned out to be as much a part of the spectacle as the art itself in this place where a sea of poppies gets to meet a seashore of people (or is it the other way around), daily, and none of those that I saw were fallen on the ground or trampled under foot; all of them were standing tall – these pristine ceramic poppies greeted by a hoard of jolly people who were there by choice, enjoying a good day out.

Perhaps as we learn to play out these rites of passage that return us back to the light that we really are, through art, we will find there is far less call to loose and then re-find ourselves through life’s more literal pageants; using symbols instead of flesh and blood and, best of all, doing it all in the space of an hour before lunch instead of over many countless lifetimes. Who knows; lets see. 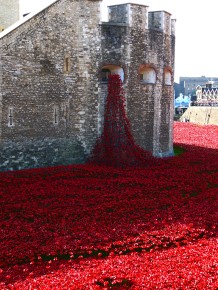 Helen White is a professional artist and published writer with two primary blogs to her name. Her themes pivot around health and wellbeing, expanded consciousness and ways of noticing how life is a constant dance between the deeply subjective and the collective-universal, all of which she explores with a daily hunger to get to know herself better. A lifetime of "feeling outside" of mainstream...slowly emerging as Asperger's Syndrome, Ehlers-Danlos Syndrome plus a complex of co-morbid health challenges, being a confirmed Highly Sensitive Person and an INFJ personality type, not to mention born under an out of bounds moon (need I go on) fed into the creation of Living Whole; a self-exploratory blog fed by a wide angle lens tilted at "health and wellness" topics. Meanwhile, Spinning the Light is a free-for-all covering a multitude of playful and positive subjects about life in the broadest sense...written with a no-holds-barred approach. Needless to say, their subjects cross over quite often.
View all posts by Helen White →
This entry was posted in Art, Art technique, Consciousness & evolution, Culture, Health & wellbeing, History, Installation art, Life choices, Light, Remembering, Travel and tagged healing, healing our history, human behaviour, humour, life metaphor, life path, light, pageant, Paul Cummins, poppies, tower of london, transformation. Bookmark the permalink.