Messages from the void

Silence is information held in a void; each and every accomplished musician or dramatist knows this and uses it to grand effect. A pregnant pause, held for just the right number of notes, conveys a plethora of meaning that we all receive amply, with no formal training required in the interpretation of its ‘language’.

A person’s tone of voice is made up by as many voids as it is words, the very spacing of the sounds within sounds that make a word longer or shorter containing enthusiasm or its opposite in a way that strikes emotion straight into our hearts. As with so many sensitive children, I started out being more minutely attentive to people’s tone of voice, their pauses and hesitations than the words they were saying, and would feel their unspoken messages deeply, profoundly without knowing how I ‘knew’ what they were really saying.

When we talk too fast, as when we are excited or afraid, it is as though to eliminate any voids that would be open to distortion or vulnerability; there is no stopping off to ponder or edit, we just want to get directly ‘to it’ and fast and its interesting how either love or fear can generate this similar race to express.

The more direct, less premeditated, a person’s connection to their source the more rapidly they spew the noises they make as they attempt to convey the flush of information coming through them and this can become unintelligible to the untrained ear unless, with conscious effort, they – slow –  it – right – down to ground it into the humanness that still believes it relies upon language and left-brain processing to make sense of what it is hearing. “Slow down, you’re garbling” is something that gets said to our children, who still intuitively know that we are much more than just a string of words and yet this is the language of excitement, straight from source and devoid of agenda and we could do much worse than to learn from it. Maybe, one day, we will evolve what we have to say into a tone that corresponds to a frequency but, until then, we continue to play with all the vast complexity of sounds that correlate to meaning and all its colour-box potential in the same way that we love to paint and create; it is the very measure of our humanness.

We sometimes say silence speaks volumes or even shouts. To ‘send someone to Coventry’ is a cruel and not so unusual punishment, a way of bellowing out our judgement, and of bullying, without saying a single word that could be held against us. People think all accountability and contract lies in our words (as ‘our bond’) but, actually, we take so much action through our silences, the things we ignore and the timely moments when we choose to say nothing, which can have the power to make and break and so alter worlds.

Our very biology pivots on a void; our DNA containing a vast, uncoded ’emptiness’ that scientists once labelled “junk” only, now, its been found to hold vast potential for unravelling why inflammation switches on in the body and how a steady vibration of love can heal it all.

Then, of course, the quantum void is the zero point of our reality, the vacuum space in which intention determines what manifests next; where our god-self creates all that is as we become the universe that experiences itself through the self-directed gaze of its choice.

Words hold the power to orchestrate those choices and so to heal; they anchor intention at cellular level, their musicality and gentleness only adding to their healing power, their staccato harshness or hesitancy just as effectively taking this away. A tone can knot the stomach and trip the body into over-reaction long before any ‘meaning’ hits the brain and, by the same token, a single, sustained note played on a singing bowl or tuning fork can heal our discordant cells by bringing them back into harmony with the orchestration of the whole. The words we say to ourselves are the most powerful ones of all but so, too, are the ones that we don’t say, those that we miss out completely because we simply forget to love ourselves. The absence of love can be the most destructive force in the universe when we unleash it, with the power to crash bodies and worlds. This is why the most powerful thing we can ever learn to do is to speak our intention and our self-appreciation out loud and very often; to frame our lips around the words “I love you” to ourselves (and yes, to others), knowing that our cells are always listening! 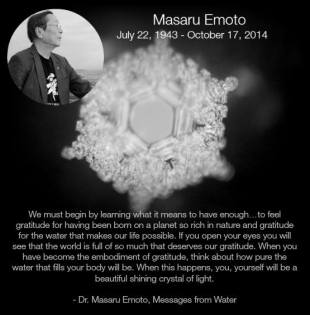 In the very week that Dr Masaru Emoto passed from this world, this is such a timely thing to think upon given it was he who taught us how water responds to the vibration of words; how it literally forms into coherent (or non-coherent!) patterns according to the words that are said in its presence. As our bodies are made up of so much water, his efforts gave to the world the stunning visuals we needed to demonstrate how we are being impacted by the endless sounds (rather, the very vibration carried by these sounds) that are relentlessly unleashed into our environment. Just as water crystals hold the space for the vibration of their environment so do we, as water-structures, hold the zillions of spaces that attune to the vibration of all that we are through the words that we that we use, the sounds that we listen to, the thoughts that we think, the company that we keep and the very frequency we aspire to. Through Emoto’s eyes, we are reminded that we are not so much the heavy bulk of coagulated protein that we think we are but, rather, containers of energy and light!

When people hold a resonance, they can remain in silence without communication for long periods of time; they are in direct heart communication and have no need to fill that void with meaningless chitter chatter. When there is a pause in communication, we are each forced to interpret that as we will but resonant hearts will both know when they are on the same page as each other, without fear. It just seems to be one of those truisms that the most meaningful relationships of all tend to incorporate long spaces of quiet while the most trivial are often filled with so much relentless noise!

The inclusion of a well positioned space is the very key to the most poignant of music, the most affecting of theatre, the most arresting of artworks, the most beguiling of views. We are naturally drawn to the inclusion of these voids at the heart of so much expression of all that we are, as the reminder of the pure potential of all that we are yet to become that lies there at our core, inviting us to create our reality in each moment through the simple act of choosing.

Yet how we torture ourself when we come to fear emptiness instead of embracing its pure potential and when, in a world gone mad with communication, we wrap ourselves up in the morse code of its spaces. A long silence waiting for a response to a ‘message’ (which, these days, could include the reaction to a ‘share’ across any one of a number of websites) can leave a person flaying in a sea of such pain and insecurity, unable to hold up their self-esteem or drag their leaden body back to the shore of their day until somebody says something back to them, delivering the validation a fearful heart so often longs for. To keep our sanity intact, perhaps the time has come to learn that the very best way to send out a message to the world is as though it is rolled up in a bottle tossed out to sea, with no timescale or expectations, though it is my experience that all messages receive an answer eventually, even if these are sometimes delivered by the least obvious or direct of means. Of those responses, there is none more consistent or valid than this one: “Above all things, you are ALWAYS your own message to yourself”.

Maybe, eventually, we will reach a point where we simply tone to one another like dolphins or so many singing bowls playing in perfect harmony; for the moment, a deeply ingrained part of our humanity is to love to engage in word play and to communicate through an ever-increasing cacophony of sound, revelling in all the complexity. Important to remember that such a cacophony could not even exist if it were not for the void of purest potential at its very centre and that this void is, of course, us.

Helen White is a professional artist and published writer with two primary blogs to her name. Her themes pivot around health and wellbeing, expanded consciousness and ways of noticing how life is a constant dance between the deeply subjective and the collective-universal, all of which she explores with a daily hunger to get to know herself better. A lifetime of mysterious health challenges...slowly emerging as Asperger's Syndrome, Ehlers-Danlos and a number of co-morbid conditions...fed into the creation of Living Whole; a self-exploratory, self-researched blog on the subject of health and wellness and ways of managing, improving and learning from such chronic health conditions. Meanwhile, Spinning the Light is a free-for-all covering a multitude of playful and positive subjects about life in the broadest sense...written with a no-holds-barred approach. Needless to say, their subjects cross over quite often.
View all posts by Helen White →
This entry was posted in Art, Consciousness & evolution, Health & wellbeing, Music & theatre, Personal Development, Pure potential, Spirituality, Universe and tagged healing through sound, junk DNA, Masaru Emoto, pure potential, quantum void, self-love, silence speaks, space, spaces in music, theatrical pause, tone of voice, toning, vacuum, vibration, void, water crystals, zero point. Bookmark the permalink.