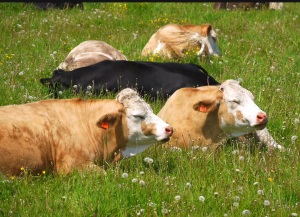 I had a thought-provoking encounter with some cows on my walk today. As Rudi (my dog) and I went through the woods beside a field, we could hear a cow making a hullabaloo; it sounded more like how I would imagine a bull elephant trumpeting in pain to sound, a full-throated guttural bellow that spoke volumes about the distress this creature was in so we went off to investigate. In the field was a very large black cow making the particularly loud noise and another one stood behind her accompanying in slightly less noisy sympathy. Then, in a totally different field across the pathway, other cows were coming over from quite some distance away and, gathering by the gate, looking anxiously towards the noise (though they couldn’t see for trees), they too started making a similarly persistent loud distress call until I was in the midst of a full chorus, though there was no doubting that it was the large black cow that was leading the call. I’d honestly never heard anything like it. 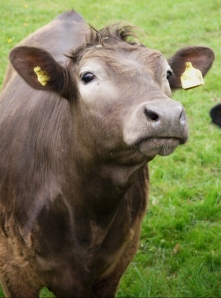 Then I saw that, in the middle of the field, two youngsters had somehow got into the metal feeder where the hay gets dropped, which is like a box with a roof and bars on one side. They’d obviously got curious and squeezed in but couldn’t get out and were contorted together, their big brown eyes peering through gangly legs and beneath the heavy bulk of their own bodies, stuck. Presumably the cow in such huge distress was a parent!

Anyway, I tied a non-plussed Rudi to the fence (for all the rain had just started to come down in sheets) and slipped and slid my way into the middle of the muddy field but couldn’t fathom a way of getting these stuck cows out of their metal cage as it opened from the top; besides, the eager parent came rushing over as though to egg me on and I didn’t want to get sandwiched between her and the metal bars so I left, shouting over my shoulder “Don’t worry cows, I’ll get you out somehow…”

With no idea how, and walking on to execute my best plan, which was to get a phone number for the farmer (but, as I couldn’t get internet signal, my only options were to phone my husband at work and ask him to do a search, or go to the church to find a number of one of the villagers off the noticeboard) I could hardly believe it when – no sooner had I set the intention to get hold of the farmer than a land-rover appeared from nowhere down the muddy track. I flagged it down and, yes, it turned out to be the farmer; somewhat bizarrely, as I’d never encountered him before across all the many years of walking there. I told him what had happened and he looked utterly bemused, saying he couldn’t understand how the cows had got in between the metal bars, but off he went to investigate. 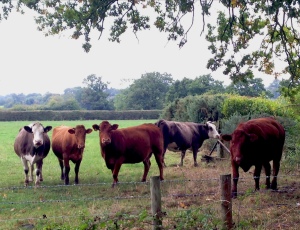 There, I’d done my bit and felt so elated that these cows had been rescued and, plus, the whole episode was such a brilliant demonstration of how group-oriented, tuned-in and empathic these creatures are and how involved they get when their offspring are in any kind of danger. There are stories and videos out there if you look for them, about how distressed cows get when their calves are taken away from them so I knew this already (but does everyone?) yet to see it in action was something else entirely, bringing it vividly to life, and so I really celebrated for these cows, newly reunited, and felt it deep in my heart. “Yay, its all sorted; they’re OK” I said out-loud to Rudi, handing him a biscuit as I sat down on a tree stump to enjoy the starlings circling over the field and the sun trying to break through the clouds. Everything felt, momentarily, right with the world and back in perfect balance.

Which was why it so saddened me, in juxtaposition with how elated I had felt at my part in this ‘rescue’, that the second part of my walk told me exactly why the farmer was visiting that day. In the other field, on the exact opposite side of the circular route to where the rescue took place, he was now rounding up a dozen or so youngsters, holding them in a pen, and I watched as half of them were arse-whipped onto a trailer to go off to a place I can only too clearly imagine. “I got them out!” he shouted at me with a cheery wave while, with the other hand, he continued smacking and cajoling these baffled and distressed youngsters onto the trailer. With an absolute certainty that I felt drop like a leadenness through my cells, I knew that these placid creatures had known their last dew-misted morning or buttercup lounging, shadow-lengthening hours together and were spending their very last moments with feet on the sun-drenched earth of their contentedly familiar world. The trailer pulled away abruptly and the hefty young creatures slid and crashed into one another like so much unsupported cargo, to more distressed moo-ing, as it bounced down the track and, suddenly, I found myself hanging over a fence, utterly overcome with it all, weeping and grief-stricken.

It felt like – in the space of half an hour, just as I had walked the clock-face of this circular route –  I had travelled a full circle of emotion, the kind that leaves you feeling stuck and helpless faced with a world that makes no sense; and so the only way to make the circle into a spiral that goes anywhere new and more expanded seems to be to shed light on it by sharing it with others. Sharing it, not to pass judgement on farming practice or the complex belief system that underlies the perceived necessity for it – I’m not seeking to attack that or take it on, to make anybody ‘wrong’ – but to bring equal exposure to the other side of the coin; by helping to bring awareness to some of the apparent senselessness, contradiction and heartache, the unseen little tragedies, that underpin the cultural ‘normality’ and consumer habits of our world.

These anomalies and hurts often, and all too easily, conveniently and habitually, remain invisible and out of sight until…maybe one day, egged on by little stories like this one…they are not, and then people will at least be equipped to make a conscious choice rather than a culturally determined one. Amongst the cultural contradictions is, starkly, this one; why sign a petition to save an elephant or anthropomorphise our cats and dogs while caring not a jot about farm animals that go to slaughter for our next meal? We came here, into life in human form, to face dilemmas such as this and to use the way we respond to them…gauging how they make us feel in our bodies…to identify who we are as human beings and I respect the individual choice of that – there is no right or wrong way to be – but I do feel the balanced process of this relies upon being as fully aware of everything, all the multi-layer factors that contribute to that decision, as we can be. We all tell ourselves stories – a happy narrative – about how the food we choose to eat gets to our plate (though I find I have to invent far less fiction since turning vegetarian…); all I seek is that the animals’ tale also gets to be told, not culturally white-washed away out of the picture, so that everyone gets to make a fully informed choice, from the heart.

Sadly, just like human mothers bond tightly with their newborn babies, so do cows bond with their calves.  Mother cows have been reported to bellow for many hours or even days after her calf is taken from her.  Author Oliver Sacks, MD discusses a visit that he and Temple Grandin made to a dairy farm: When they arrived, they heard many cows bellowing, causing a very loud and unnerving sound.  Temple commented, “They must have separated the calves from the cows this morning,” and indeed, that was exactly the case. Similarly, John Avizienius, a senior scientific officer at the Farm Animal Department at the RSPCA in Britain, discusses one particular cow that suffered great emotional distress over the separation from her calf:  She bellowed for hours, and even after six weeks would hover at the pen door where she had last seen her calf. Dairy Cows And Their Calves article

Concerned phone calls came into the police department between midnight and 7AM reporting “inhuman” sounds, but callers were told not to worry – they were just the moans from mourning cows who recently had their baby calves taken away from them.” Residents told not to be alarmed by mourning cows article

When this mother cow, Karma, lost her baby, she cried all night… until she was emotionally reunited the next day! Watch this video from The Gentle Barn organisation with tissues to hand! gentlebarn.org

Helen White is a professional artist and published writer with two primary blogs to her name. Her themes pivot around health and wellbeing, expanded consciousness and ways of noticing how life is a constant dance between the deeply subjective and the collective-universal, all of which she explores with a daily hunger to get to know herself better. A lifetime of "feeling outside" of mainstream...slowly emerging as Asperger's Syndrome, Ehlers-Danlos Syndrome plus a complex of co-morbid health challenges, being a confirmed Highly Sensitive Person and an INFJ personality type, not to mention born under an out of bounds moon (need I go on) fed into the creation of Living Whole; a self-exploratory blog fed by a wide angle lens tilted at "health and wellness" topics. Meanwhile, Spinning the Light is a free-for-all covering a multitude of playful and positive subjects about life in the broadest sense...written with a no-holds-barred approach. Needless to say, their subjects cross over quite often.
View all posts by Helen White →
This entry was posted in Animal welfare, Consciousness & evolution, Culture, Health & wellbeing, Life choices, Nature, Personal Development, Vegetarianism and tagged animal welfare, calves, cows, distressed cows, farming, knowing where food comes from, meat industry, separation, transparency, vegetarian. Bookmark the permalink.

6 Responses to An animal’s tale