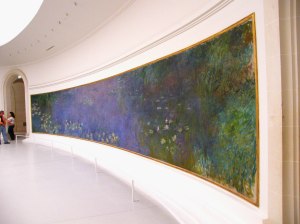 On visiting Paris last month, we had the usual dilemma of how to make the most of our time but there was one place on the list that was completely non-negotiable.

L’Orangerie had left an indelible mark on my psyche from previous visits. Quite aside from the display of Monet’s iconic Water Lilies, there was something about the energy of this space that I had found flitting in and out of my consciousness across all the years since the last time.

This time, aiming for early in the day, the gallery was busy but not crowded. The paintings, of course, were as mesmerising as I’ve ever found them to be; I can spend whole

breath-held minutes staring at just one small portion of juxtaposed colour…acid green against fuchsia pink against purple-blue…and emerge a hundredfold more inspired for the experience.

Stepping back, the panoramic scale of these pieces allows you to become immersed within life-sized insight into Monet’s perspective; his unique way of experiencing the every-changing landscape of the water gardens that I’ve now had the joy of experiencing for myself, albeit in the full glare of August sunshine as one of a snail-procession of tourists (not with the luxury of settling down with paints to observe the morning dew glistening on willow tendrils overhanging the still and shady waters beneath…if only). Stepping close, you get to marvel at all the scribbles and haphazard dashes of colour, the whole crazy, fluid explosion of multicoloured brush strokes and texture that Monet used to create the sense of light and reflection, the multi-layers of reality that are routinely presented to us through the eyes yet notoriously difficult to paint.

As a painter, I like to get up close, very very close.

Yet what really struck me, on this visit – almost as though it was a newly installed piece of installation art – was the sound. With the mixture of language being spoken, in soft tones, by so many reverential beings working to hold enthusiasm in check, the sounds in that space merged to become a unified whole that had such a musical quality to it. The acoustics were such that I was reminded of the sound made by many voices in a public swimming pool and, combined with the ability to decipher meaning through language having been suspended, the specifics began to blur to become something more akin to a vibration, a hum, a tone or a sort of one-sound made up of all of us.

Like whale song across the deep, I was struck in the chest by the reality that this was the song of humanity, perhaps as heard across the universe by other beings intent on assessing our soul signature before making their first overtures.

This sound was quite lovely, I realised with suddenly swelling heart, and in a way that surprised me with its power to undo me so early in the day. Taken to its average, it was an almost constant, soothing hum, like a mother speaking reassurance to an overwrought child. There was steady good heart in it. Yet there were bass notes and alto embellishments which added melody to the whole and then moments of opening up and closing down, like a sea anemone on the ocean floor. 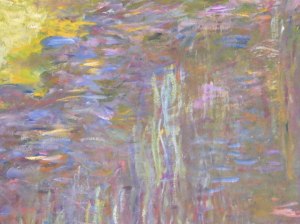 I was struck by an almost orchestrated rhythm to it all, one which mimicked the plod plod of breathing in and breathing out, pulling the whole of it together.The very energy of this space had become animated and organic; the room had become larger than the sum of its parts.

Something in the arrangement of this gallery, I realised, had contributed to this effect, as well as to the easy movement of beings around its space. Like a gently choreographed  dance, I watched people who had never met before seem to know exactly when and where to be in the circumnavigation of this space…step closer, step back, sit down, stand up, move on, weave in and out of each other in such an easy state of awareness and flow. The exception was a woman and her

several followers who had claimed their space and taken root right in front of one of the panels and, obscuring that whole section of its beauty, appeared oblivious to both the art and the pleading expressions of others that said loudly without words “please could you step aside so we can see”, so engrossed were they in their own all-consuming affairs.

Like a fish tank containing a microcosm of humanity as a curiosity to behold, I found myself smiling at the idea that Monet had actually provided watery decorations for such an anthropological project.

The majority of people moved with ease through the two intersected ovals that made up the gallery, a veritable infinity symbol made up of moving, flowing beings in calm appreciation of life-size beauty made manifest to them in a way that they might have paid far less attention to out-of-doors in ‘real’ life (though perhaps, having experienced this, not the next time). 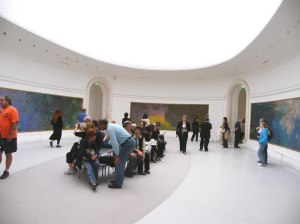 Suddenly, I felt as though I was above the scene, watching this infinity flow of moving life forms that had none of the bottle-necks, the awkwardness, the angularity of the traditional square gallery and I was suddenly in a wave of gratitude for those who redesigned these oval spaces within the original building, perceiving clearly how Monet so obviously had his say in their design to show off his work according to the vision that he had.

L’Orangerie, to me, is where space becomes art, art becomes life, life becomes art and art becomes space in a double-oval ‘loop’ that is an infinity symbol all of its own.

Photography: All of these images were taken on my previous visit to L’Orangerie in 2008 since photography is no longer allowed in the gallery. You can see the full collection of (many) images that I took HERE.

Helen White is a professional artist and published writer with two primary blogs to her name. Her themes pivot around health and wellbeing, expanded consciousness and ways of noticing how life is a constant dance between the deeply subjective and the collective-universal, all of which she explores with a daily hunger to get to know herself better. A lifetime of "feeling outside" of mainstream...slowly emerging as Asperger's Syndrome, Ehlers-Danlos Syndrome plus a complex of co-morbid health challenges, being a confirmed Highly Sensitive Person and an INFJ personality type, not to mention born under an out of bounds moon (need I go on) fed into the creation of Living Whole; a self-exploratory blog fed by a wide angle lens tilted at "health and wellness" topics. Meanwhile, Spinning the Light is a free-for-all covering a multitude of playful and positive subjects about life in the broadest sense...written with a no-holds-barred approach. Needless to say, their subjects cross over quite often.
View all posts by Helen White →
This entry was posted in Art, Art history, Art technique, Artists, Consciousness & evolution, Culture, Exhibitions, Painting, Personal Development, Spirituality and tagged Claude Monet, gallery space, human voices, humanity, Infinity symbol, L'Orangerie, les nympheas, living art, oneness, Paris travel, vibration, Water Lilies. Bookmark the permalink.