The Dark That Allows Us To Know The Light

I recently took a step out of the framed, contained paintings that are my norm and ordered myself a canvas of new proportions; something about as big as I could practically transport to a gallery and with sufficient depth to stand alone without framing.  The subject I had in mind: a particular moment captured in a few shots taken from a deckchair in a garden in Nottinghamshire in late summer.  A sunny day – sunny enough, in fact, for a glorious walk over hills followed by a lunch outside a pub – had started to develop that interesting, contrasty lighting that precedes a storm: yellow tones in the landscape became citrussy against a sky with ever increasing hints of indigo and Payne’s grey and when one of our group shouted out “look at that”, I turned to catch dramatic black cloud formations arriving over the rooftop against the still-blue summer sky, with the ever-relentless sun positioned in such a way as to form a perfect “silver lining” around the edge.

With the juxtaposition of intense light behind rain cloud, the bulk of the cloud mass took on an ominous presence made up of seething purple-grey forms that you could see were endlessly accumulating, overlaying and blackening in molten density, like a sudden portender of doom overhanging the house.  Yet the sun persisted in delivering a message that was quite the opposite of this in the form of an edge of intense golden light around the cloud’s dense bulk as break-away forms of thinnest vapour followed suit, magnifying the effect of the sun’s incredible radiance through their wisps of purest white against the deep-blue sky.

The storm was brief: a few claps of thunder and some short sharp rain, followed by a memorable double-arch rainbow over the cityscape as we drove back to where we were staying half an hour later, by which time the storm clouds had dispersed and the unremitting sunshine had resumed. 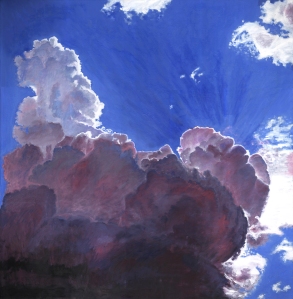 The effect, in my consciousness, of those clouds was longer lasting than the brief summer rainstorm and played out in the form of this largest of my recent paintings “Relentless Light”, whose title was not the one I originally intended but which came to me impulsively as I uploaded the first image to my website.

Perhaps, as with an increasing number of my paintings, the reason this subject stayed with me for so long and demanded fullest, boldest expression is the fact  that it contained a deeper message within the transient beauty of the moment.  Here, in a brief living and most common-place of occurrences, was expression of one of the great truths of life, perhaps the greatest: that without dark there is no light, that it is the moments of starkest, darkest contrast that allow us to perceive those supreme moments of radiance which (just as the sun is always, always there, behind the clouds) are happening simultaneously, if we are but open to them. That it is the dark that allows us to know light. In a way, this is the essence of the message that runs through all of my work – but this is certainly my largest-scale expression of it to date!

Relentless Light is currently exhibiting at The Wey Gallery. You can view this painting (and all the rest) at www.helenwhite.org.

Helen White is a professional artist and published writer with two primary blogs to her name. Her themes pivot around health and wellbeing, expanded consciousness and ways of noticing how life is a constant dance between the deeply subjective and the collective-universal, all of which she explores with a daily hunger to get to know herself better. A lifetime of mysterious health challenges...slowly emerging as Asperger's Syndrome, Ehlers-Danlos and a number of co-morbid conditions...fed into the creation of Living Whole; a self-exploratory, self-researched blog on the subject of health and wellness and ways of managing, improving and learning from such chronic health conditions. Meanwhile, Spinning the Light is a free-for-all covering a multitude of playful and positive subjects about life in the broadest sense...written with a no-holds-barred approach. Needless to say, their subjects cross over quite often.
View all posts by Helen White →
This entry was posted in Art, Art technique, Consciousness & evolution, Landscape art, Life choices, Painting, Personal Development, Spirituality and tagged contrast, painting clouds, painting light, sky in art. Bookmark the permalink.