The Diamond and the Bridge: A Real Gem of a Story

I’ve spoken many times before about Swallowfield Park, a favourite place to walk and constant supply of something new for my camera, whether its a flock of sheep crossing the bridge or a memorable sunset.

This weekend, it was all dressed up in its late-autumn colours and, after many years of taking what is, effectively, the same shot of the bridge that I always take, albeit in different seasons and lighting conditions, I finally took one that I was really pleased with. It’s the radiant yellow-orange glow of the horse-chestnut tree in full

sunshine that makes all the difference to this shot and, all over the park on this walk, I discovered an acid-vividness to all of the autumn colours, juxtaposed with the dark, spiney texture of the surprising number of conkers still on branches because – for once – we haven’t had all that much rain or wind to strip the trees bare before they could reach these colourful heights.

Back to my favourite bridge: The Thomas “Diamond” Pitt bridge, built by the grandfather of the well-known prime minister of same name, is dated 1722 – which was shortly after he purchased the estate with proceeds from the sale of an enormous diamond that had found its way into his hands by a somewhat dubious route. The story goes that, following an audacious career in which he was variously employed by, or in competition with, the British East India Company, he had “come upon” and so acquired the huge diamond from an Indian merchant who had, in turn, purchased it from an English sea captain who had himself, rumour has it, stolen it from a slave (with stories varying as to how a slave came by such a stone in the first place). Pitt arranged to bring this rough hewn diamond back to London where – with some effort – it was transformed into a 141 carat brilliant as well as several lesser stones, one of which was sold to Peter the Great of Russia. The sizeable gem itself was finally sold to Philippe II, Duke of Orleans, in 1717 for the princely sum of £135,000 and became one of the crown jewels of France.  I gather it is still on display in the Louvre today. 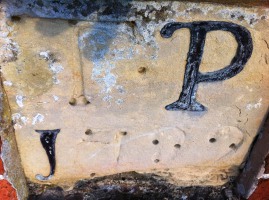 Whatever the intrigue behind “Diamond” Pitt’s new found wealth, it was sufficient to purchase several properties, one of these being Swallowfield Park, which became his favourite residence of all and the place where he died in 1726.  The bridge across the Blackwater that was built during his residency – and, in fact, my favourite bridge of all time; scene of many family walks, games of Pooh sticks and thoughtful moments looking up river towards All Saint’s Church (and there lies another story or two) – is inscribed with his name and the date it 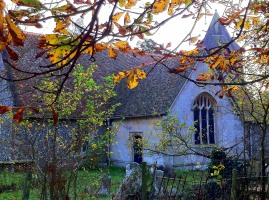 was built. This little piece of history, the intrigue of the diamond, smuggled all the way from India to England by an intermediary and then discreetly sent off to a London jeweller, to be worked on for two years before being touted around the courts of Europe (can’t you just see it; the furtive assignations, the whispered rumours, a dazzling gem drawn forth from a velvet pouch in the murky booths of coffee houses…) in an effort to raise the very biggest sum possible on which to retire respectably – this literal gem of a story quite often pops into my head when I stand at the bridge and enjoy the view.

The full set of photos from this walk can be viewed at Helen White Photography.

Helen White is a professional artist and published writer with two primary blogs to her name. Her themes pivot around health and wellbeing, expanded consciousness and ways of noticing how life is a constant dance between the deeply subjective and the collective-universal, all of which she explores with a daily hunger to get to know herself better. A lifetime of "feeling outside" of mainstream...slowly emerging as Asperger's Syndrome, Ehlers-Danlos Syndrome plus a complex of co-morbid health challenges, being a confirmed Highly Sensitive Person and an INFJ personality type, not to mention born under an out of bounds moon (need I go on) fed into the creation of Living Whole; a self-exploratory blog fed by a wide angle lens tilted at "health and wellness" topics. Meanwhile, Spinning the Light is a free-for-all covering a multitude of playful and positive subjects about life in the broadest sense...written with a no-holds-barred approach. Needless to say, their subjects cross over quite often.
View all posts by Helen White →
This entry was posted in Biography, History, Nature, Photography, Walks and tagged autumn leaves, diamond, Swallowfiled Park, Thomas "Diamond" Pitt. Bookmark the permalink.